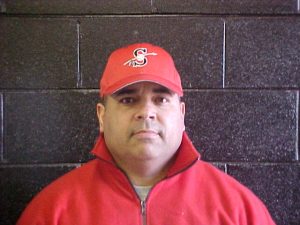 Todd Miles begins his 20th year as the top varsity assistant baseball coach at Terre Haute South. Coach Miles handles the outfield duties for the Braves as well as coaching first base. He is presently an Indiana State Trooper stationed in Terre Haute.

Todd graduated from South in 1984 and played varsity football and baseball in 1982, 1983, and 1984. Upon graduation, he played baseball at Indiana State University for four years and was a member of the 1986 team that advanced to the College World Series.

Todd and his wife Suzanne, have been married for 23 years and have two daughters, Allie (18) and Sammie (14). Todd’s brother Trent, also a Terre Haute South graduate, is currently the head football coach at Georgia State University.

“Todd’s baseball experience is second to none. Having played in the College World Series gave him an experience that all of our players can relate to.” ….. Coach Kraemer