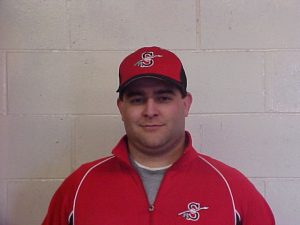 T.C. “Sidwell” Clary begins his tenth season as a volunteer baseball coach with the Braves. He will be serving as an assistant Varsity infield coach for the Braves.

T.C. is listed as one of the best baseball players to ever step on the field at Terre Haute South. In 1998, he lead the Braves to the Evansville Semi-State and pitched 9 2/3 innings before eventually losing to Hamilton Southeastern. He was also selected as the ninth baseball player in Terre Haute South Vigo’s history to participate in the Indiana High School Baseball Coaches Association North/South All-Star game in 1998.

T. C. is presently an attorney at the Wright, Shagley and Lowery Law Firm in Terre Haute.

“Having T. C. in the program speaks volumes. He was one of the gutsiest performers we have ever had. Our players will definitely benefit from Sidwell’s presence.”…..Coach Kraemer