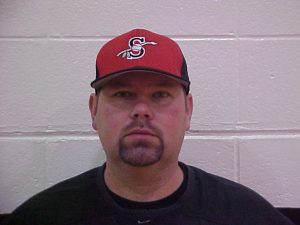 Brian Pickens enters his 24th year as a coach for the Braves. Brian will be the Junior Varsity head coach again this year. Brian’s primary responsibilities in our program are working with the catchers and hitters.

Coach Pickens is a 1981 graduate of South where he played football and baseball for the Braves. Upon graduation, he played baseball at Indiana State University for two years before serving four years in the United State Marine Corps. Brian is a graduate of Lenoir Rhyne College in Hickory, NC.  He also received his master’s degree from Olivet Nazarene in 2007.

Prior to returning to Terre Haute, “Pick” served as the varsity assistant baseball coach at Maiden High School in Hickory. Brian is presently teaching in the Social Studies Department at Terre Haute South Vigo. He has also been a defensive line coach for the Braves football team in the past.

Coach Pickens has been married to his wife Donna for 25 years and they have one daughter, Alexandra (23).

“As Brian works with our catchers, I know that we have the most fundamentally sound catchers in the state, year in and year out.”…..Coach Kraemer