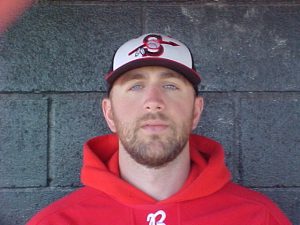 Coach Lindsay begins his eighth season in the Braves program and his second year as a varsity assistant in charge of pitching.  Adam graduated from West Vigo High School in 2002, where he was a starting pitcher for the Vikings.  He was selected to the All-WIC Team both his junior and senior seasons.

Adam continued his baseball career with the Sycamores of Indiana State University, where he majored in Physical and Health Education.  One of Coach Lindsay’s greatest achievements was leading the Missouri Valley Conference in pitching appearances (35) during his sophomore season.  Adam graduated from ISU in the Fall of 2008.  He then returned to West Vigo and coached the freshman boys basketball and freshman baseball teams for two years.  Coach Lindsay was a valuable member of the 2008 and 2009 baseball coaching staff that saw the Vikings advance to the Semi-State and State Finals.

Coach Lindsay is currently teaching at Terre Haute South Vigo High School in the Physical Education Department and was the head freshman football coach for the past seven years.  Adam would like to thank his parents, who challenged him mentally throughout his formative years and made him the husband, teacher and coach that he is today.  He would also like to thank the former coaches that instilled in him the ethics of hard work and dedication.  Those coaches are:  Chuck Bahr, Bobby Moore, Steve DeGroote, Nick Zumsande and Bob Warn.

Adam and his wife Allison, have been married for 9 years and have a son, Nathan (5 years) and a daughter Nora (3 years).

“Adam’s playing experience and pitching knowledge solidifies our coaching staff.  Our pitchers will be mechanically sound and ultra competitive because of Adam’s presence.” …..Coach Kraemer