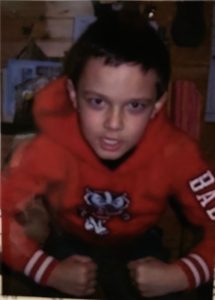 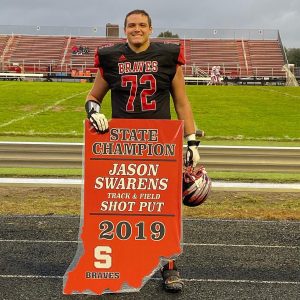 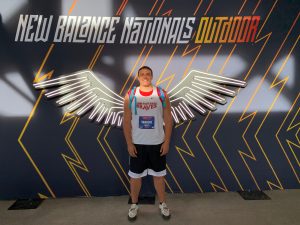 This is the first of several interviews we’ll do with  our athletes. Up first, the defending shot put state champion, Jason Swarens.

Ed Jarvis-Whats it feel like to win a state championship?

Jason Swarens-Winning a state championship was pretty cool. Just kidding. It was thrilling and very rewarding. Not only do you receive a medal but you also receive a sense of knowing that all the time you put in has payed off.

EJ-What are you doing right now to prepare for the season?

JS- With weather permitting I try my best to get outside to throw shot and disc. When the weather is not so nice I will do small exercises like push-ups every time I go to the kitchen, and without a weight room, I do lots of body-weight exercises. When I’m not exercising I’m either eating or playing video games like Madden or Call of Duty. I have also been paying attention the NFL free agency which has been pretty crazy

EJ-How are track and field and football similar?

JS-Football and track and field complement each other significantly. As a shot putter it is important to be explosive, have good technique, and channel all of your bodies energy. All of these aspects are also seen in an offensive lineman. If an offensive lineman does shot put, they can learn to use their hips and lower body at full power rather than just using upper body strength. You could also say a shot putter that plays football could increase strength and endurance which are very important in training for shot put. Although I am not a runner, I would assume a wide receiver or running back would benefit off of the techniques that are taught in track such as linear speed and an explosive running start. Overall track and football are similar in technique and form, speed, and explosiveness.

EJ-What are you looking forward to in college?

JS- I am looking forward to becoming a better athlete and student at UW-Madison. I am excited to learn new techniques and better my form for shot and disc, and compete and train with astounding student-athletes. I am also eager to major in mechanical engineering. I have always been interested in how different objects work and the math behind it.

EJ-Why did you choose the University of Wisconsin?

JS-I chose UW-Madison because while I was on my visit it felt like home. A lot of my family members grew up in Wisconsin so I have always been a big badger fan and once I went on my visit there, I knew it was special. The athletics, academics, campus, and most importantly food were amazing. The coaches, faculty, and athletes that I met were very nice and sincere. Although it is a bit cold, I can always ask for a nice and heavy coat on my birthday.

EJ-What are some of your favorite classes?

JS-I have a lot of favorite teachers and classes, but my top 5 include AP US History, AP Physics 1 & 2, AP Calc, AP Chemistry, and Racquet Sports.

JS-Some of my favorite memories of track include the big man relay at brown county high school which was a race between the shot putters, the bus rides to and from meets, and best of all was winning state in shot put.

EJ-What’s your warmup music before you throw?

JS-While we are on the way to a meet I usually listen to 80s music because it is really calming and helps me get a good pre meet nap. While I am waiting for my flight to throw or warming up I usually listen to rap music. I really like Travis Scott, old Kanye West, and Drake. My hype song is definitely Black Head by Kanye West.

EJ-What can Coach Montgomery beat you in?

JS-Jordan could probably out bench me and beat me in a mile, but other than that I’m winning everything.

Thanks Jason and good luck this season!